SCACCOMATTO is a sound game based on the chess game rules.
Two teams (WHITES and BLACKS) corresponding to two different series of sound materials play against each other, moving on a chessboard whose 64 fields correspond to another series of 64 different sounds. The two teams have to be opposite in their sound charachteristic (they could be wood against metal, classic against popular, writing against improvisation…). The 64 sounds series should be related to the two teams as a sort of mediation point (we could imagine a funny game played by BEATLES’ samples against ROLLING STONES’, moving on 64 excerpts from classic music, or anything else which suggests the idea of a sound map where two teams of 16 sounds per part are moving). The range of possibilities is very wide, and the director-arranger who decides to perform SCACCOMATTO is asked to build his/her own game and to invent sound rules in correspondance with the chess rules (including the possibility of a live-version with two groups of performers and an interactive chessboard, where the two groups stay and walk).
The final score is a real chess game; pieces from both teams move playing their pre-built patterns on sounding fields. 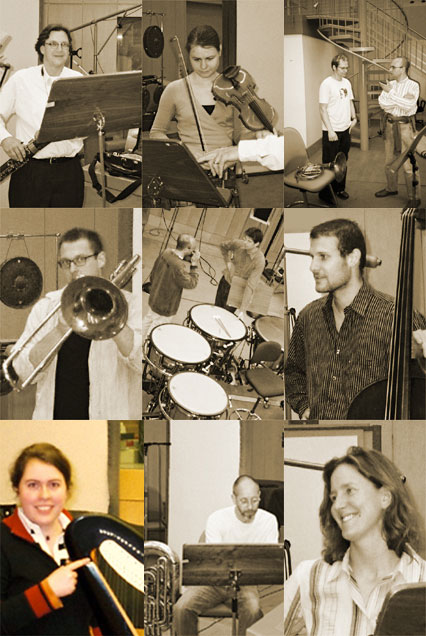 The version produced for Studio Akustische Kunst is a radiophonic piece arranged for two groups of instruments/sound-sources: a classic orchestra (playing written music) against an electronic one (playing improvised and auto-generative music), moving on 64 different natural and everyday life sounds.
As following the scheme of the instruments employed: 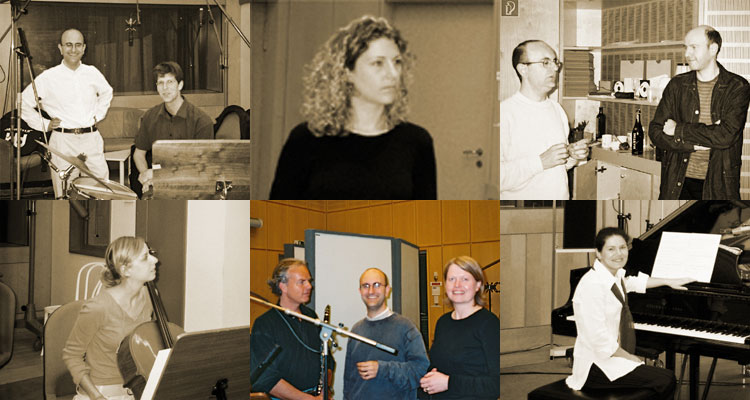 The chessboard consists of 64 different everyday-life sounds: far from the idea of exhausting the enourmous range of possibilities, the sounds chosen represent anyway a great many of what we hear in everyday life, and/or the acoustic archetypes of our lives. As following the constructing scheme of the chessboard:

SOUND-RULES:
The sound drammaturgy follows strictly the development of the game, adding some acoustic/musical inventions; I have settled an average duration ranging between 9 and 11 seconds per 1 minimum move (2 chessboard fields, i.e. the distance covered from the starting field to the arrival field); every instrument or sound-source employed for the two teams, consists of a series of 10 patterns belonging to the single piece; i.e. pawn 1 (flute, playing in C mode) is free to choose among 10 patterns corresponding to 10 of its 2 field moves; if in the game it has more than 10 moves, pawn 1 will repeat one of the patterns already played before; if it has fewer moves it will play fewer patterns – in other words not all the music written might be played. As following, the scheme of the sound dramaturgy:
– Every single piece moving on the chessboard plays its pattern for the length requested by the length of its move, i.e., a pawn can move only 2 or 3 fields (including the starting one), in this way the corresponding pattern will be played for a duration of 9 to 11 seconds: if the pattern is longer it will stop before, if shorter the performer will play the next one of the 10 pattern series. The pattern plays overlapped to the sounding fields employed in the move.
– Since the Knight moves for 4 fields, the performer is free to choose the L form, if moving for 3 fields vertically or 3 fields horizontally.
– A piece taken overlaps for a couple of seconds with the attacking piece and drops down in pitch, until it’s dead.
– Every time a piece is taking another one, its team creates a CHOIR (the remaining pieces of the team to which the taking piece belongs will play simultaneously for a few seconds 1 of their patterns, possibly excluding the one already played, every time in a different random order).
– In case of CASTLING the King and the Tower play simultaneously, as well as the corrispective fields covered on the chessboard.
– Every time there is a CHECK TO THE KING the whole chessboard resounds :all the 64 fields play simultaneously for a few seconds, every time in a different random order, and then the attacked King becomes a GHOST (its pattern resounds on the distance with reverb).
– In case of EN PASSANT, also the third field is heard.

SCORE:
The score can be divided into 3 parts:
– Introduction: a 2 minute section, introducing the chessboard; all the 64 fields play organized in 8 sequences of 8 fields overlapped.
– The game (noted according to the chess classical notation):
– Finale: as the game is over, the whole chessboard resounds (all the 64 fields play simultaneously) while all the pieces inside and outside the chessboard play their patterns one after the other; the piece ends with this 96 sound-sources (64+16+16) chaos fading out, surrounded by increasing reverberation.

The version of SCACCOMATTO for the Studio Akustische Kunst ends in STALEMATE; in other words it’s impossible to decide who is stronger between classic and electronic music.