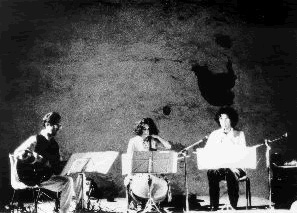 Pages and improvvisations on Hamlet (1995/97)
For oboe/English horn, cello and electric guitar

The photographs of some characters and situations from Shakespeare’s “Hamlet”, come back to light softly coloured in sepia; the memory of Hamlet, Ophelia, the King and the Queen shade off in sound-paintings, a halfway between chamber music and Hitchcock’s soundtracks, alternating magic and grotesque, violence and tenderness, Elizabethian madrigals and “New Trends”. Strong contrasts as the uncontrollable movements of these characters’ souls. “To be and/or not to be”, simply one the lost memory of the other, conspire and combine, oscillating between written music and improvisation.

Originally composed for a piece of dance-theatre, RITRATTI has become a concert piece.