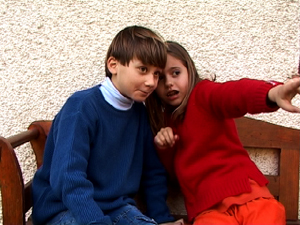 LITTLE SECRETS
Marco and Matilde, two children nine years old, chat happily on a bench. They talk as if they have important secrets to reveal; but the words they whisper are undecipherable in the commong language, in fact their lips pronunciate melodies scored for piano (Marco) and marimba (Matilde), detailly synchronized with the movements of their bodies. Secrets remain secrets.

PICCOLI SEGRETI investigate in the field of body and landscape rhythms, as other previous works of mine (BOLLE ­ 2005, and MATILDE E L¹ORGANETTO ­ 2006); the result is an amusing composition of sounds and images whose score is generated directly by the film itself. Marco and Matilde move like charachters of the Italian Commedia dell¹Arte, they look as sorts of puppets whose asimmetric rhythm is balanced here and there by a ragtime theme.