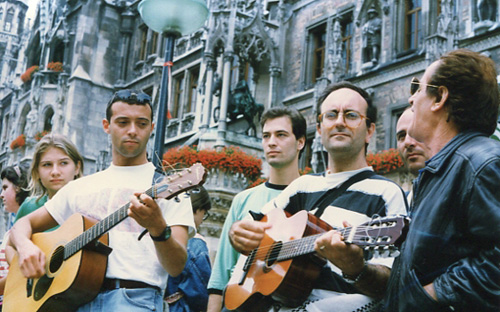 What is counterpoint and in which way can it be applied to Acoustic Art forms which work with noise and sound? Who influenced you in using this technique?

Well, historically counterpoint is a compositive technique which consists in putting into relationship two or more melodies which move independently, but at the same time if we place them one upon the other they form some points of concordance; in our century the idea of concordance and discordance has changed completely, so, in this acception counterpoint can be intended as a way to put any kind of sounds into relationship, using schemes of interaction; for this reason we can speak of counterpoint not only in the music of Bach, but also in Boulez or Nono.
For me counterpoint is a way not only to make sounds or melodies interact, but also noises, spoken voices, and we can extend this idea also to other fields, such as visual arts, literature etc. It may sound like a paradox, but for me counterpoint is a way of life. One example: when I go in a wood I can hear birds singing; their rhythm forms a sort of score based on counterpoint; in the same way, when I’m driving to the centre of the city I see cars and bicycles everywhere, people shouting, running, smiling… all these activities look very much like a counterpoint, and if we tried to sign their rhythm on a paper, we would notice a score with crescendoes, diminuendoes, elements placing one upon the other and repeating ciclically, just like it happens in Reinassance Music with simple melodies. I think that counterpoint is a sort of map of the world’s movements; in this way it’s easy to suppose the use of counterpoint also in Acoustic Art: we have only to treat sounds and noises as classical melodies.
Some good examples of counterpoint have come to me from literature: James Joyce’s “Ulysses” and Michael Ende’s “Neverending Story”, where different plots, characters and situations are interacting in sorts of poliphonic schemes; and I have been influenced also by experimental theatre, where it’s often possible to observe different actions happening at the same time; but I have found a very good example also in Radio-Art: I’m wondering about Alvin Curran’s “Crystal Psalms”, where seven European countries are creating a counterpoint using the radio as a mixer.

Why do You think is the counterpoint method appropriate for LEZIONI DI MUSICA? How does it support the statement or “message” of your piece?

As I just said, for me counterpoint is something which reflects the world’s movements; therefore, I’m particularly interested in using it when I’m working on different stories, with different voices, just to put them into relationship. In LEZIONI DI MUSICA there are boys and girls speaking about their love-connections, about their ways of life… at the beginning they are alternating with sudden cuts, but step by step their stories start climbing one upon the other, creating a chaos which according to me reflects the typical moments of our lives when it’s difficult to find a direction; this absence of direction is confirmed by 90% of the interviews I’ve made. Of course, it’s not possible to create an objective panorama of the age of twenty, because we should interview a great many of young people from very different social and cultural levels… anyway I’m sure that the age of twenty is a period particularly crossed by this problem. Well, in this Hörspiel counterpoint has got the function to express similitudes and differences of these people, to put them in comparison and to create a sort of their own “society” inside the work. If I compare composition to a sort of “society”, I can try to individualize an aestethic-sound-social architecture which represents the structure of a piece, and which controls not only the formal rhythm, but also the characters’joy and sadness, male and female, stasis and movement, silence, and so on. In other words this architecture can control not only the form of a piece, but also the content. I feel that counterpoint has got a social meaning just for its power of interaction. In music it makes people play together everybody at the same level, without the distinction between melody and accompaniment; everybody has got his own important function…

Concerning the treatment of the spoken word in your piece; do you think it is unnecessary to understand each single word? why not?

Generally, from my personal point of view, it’s better to understand everything of a text, either poetical or everyday spoken language… in the case of LEZIONI DI MUSICA, I started to conceive it as a work in the Italian language; but when the chance of producing it for the German Radio came, suddenly the problems of translation appeared; at the beginning I was very afraid of opening this door, because I thought that the two languages could disturb each other. But the first results convinced me that I wasn’t right; the use of Italian-German was wonderful, provided that we used counterpoint; this meant that we had to sacrifice some words or sentences in both languages, to let space to a sort of general impression of what was happening inside the work; and while cutting, I realized that while we are speaking we are used to saying some important things as well as many words not useful for the comprehension, upon which we can place the translation; a little bit like in music when an important melody is followed by a weak one, or moves upon less important lines; we have sacrificed only useless words, and the final result has been a work in which words constitute a musical element. Words used like notes. Two languages reflecting one inside the other. And my Italian students – people not involved at all in Acoustic Art – who have listened to both versions, prefer the one with translation.

Why did you make a piece about music students? Why did you connect it with love and relationship-issues?

I wanted to make a piece about the meaning of teaching, I was very much influenced by Alain Corneau’s movie “Tout Les Matins Du Monde”, which shows how teaching music becomes teaching life. At the same time in my fifteen years experience of teaching guitar, I observed that, most of the times the possibility of estabilishing a deep relationship between teachers and students had come just from people around the age of twenty; still now, after few lessons young people start to speak about their love-connections or problems, they ask me advice, or simply they tell their stories; and this reminds me when I was a student of composition… it often happened that I spoke to my teacher of my problems of the heart… well… I thought that I had to do something with it, and thus LEZIONI DI MUSICA is born. For me this is a way to show that love and relationships are something around which the whole world is moving, even if sometimes it can appear very naive or abused speaking about it, expecially in a direct way; at the same time I wanted very much to create a text using everyday spoken language… I think it can be interesting to listen to what people are saying, and also a little bit provocatory to propose it to an auditorium.

What is your general interest in working with sound? Is there an overall “message” in your whole work?

I like to work as a composer in the several fields which I am offered ; I think that through sound I can express many different situations and realities, and that I can give my personal interpretation to events; I don’t feel split if I am composing an Acoustic Art piece, a symphony, a song, or if I’m making an arrangement for a pop production. For me sound is a means, my first one, but not the only one to express some great themes which have always been inside me, the idea that everything is flowing and slowly changing to return later tranformed… in my whole work I have tried to express these ideas using music, slides, texts, whatever else…

Is there something else you want to talk about?

Few words more about some ideas developed inside LEZIONI DI MUSICA. The work is divided into three sections which apparently start in casual points, as the continuation of something interrupted before. Many parts of the text are fragmented and put together into different combinations; this supports my idea that our lives are materials brought by the stream of a river, which continually give birth to new aggregations; for somebody this is the demonstration of casualness, for me everything is regulated by destiny (i.e. counterpoint and harmonic relations control)