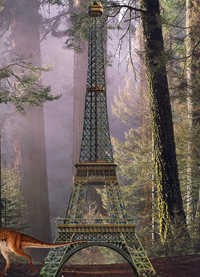 (read the text)
The world existed before man and will exist after, and man is only an occasion which the world has got, to organize some information about itself.
(Italo Calvino)

About 1,6 millions years ago Neandarthal Men started moving from Africa towards Europe and Asia. They lived there between 230000 and 30000 years ago. Nevertheless they were reached by Homo Sapiens about 90000 years ago, and this might be the origin of their extinction.

The story starts in Paris in 50050 before Christ. In a cafe, a couple of Neandarthals chat with a couple of Homo Sapiens. They are drinking coffe and talking about who and what. At a certain point the waiter reveals himself as an Australopithecus not yet estinguished and makes himself blow-up, a real kamikaze.
The tremendous explosion opens the gates to an imaginary lanscape made of atoms and elementary particles. The clock has been set up on 14 bilion years ago at the age of the big-bang.

The opera is structured on an interpretation of the subdivision of time in ages and periods adopted by geology.

The sound dramaturgy is built up on the combination and interaction of fragments of this improbable Paris of the year 50050 before Christ, created as a sort of acoustic game made up of objects and their sounds. A saxophone which “does not fit in the story at all, but plays cool!” (as mentioned in the text), underlines the development of the universe and creates a parallel sound dramaturgy.
GEOLOGICA wants to make us reflect in an ironical way on the fact that man is only a little parenthesis in the universe expansion, as we read in Italo Calvino’s enouncement, we are a little occasion to gather some information about ourselves. Our ephemeral state should make us reflect about the sense of our actions, doing and undoing, loving, fighting, believing in God, reading, throwing coins in the fountains, touring etc.
In the sound dramaturgy the idea of man is undecipherable, almost completely absent; the australopithecus is instead the only one who is always present during the whole period of 14 billion years, he is the cause and the effect, the responsable of all that happens in time and space, he observes and makes comments and he is able to cross easily the door between scientific events and biblical legends. Any time he appears some great event happens, some destruction and reconstruction; in other words he is like 2001 Space Odissey’s monolite. 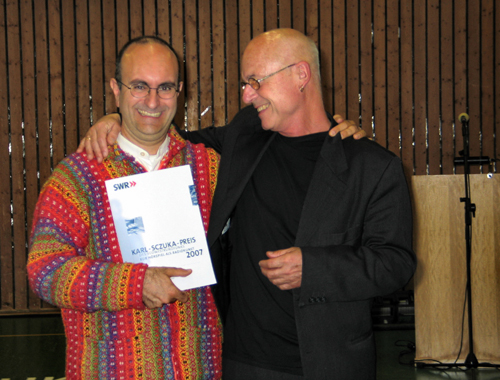 Stefano Giannotti and Goetz Naleppa in Donauechingen, October the 20th, 2007 at the Karl-Sczuka-Preis Award cerimony