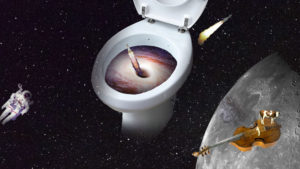 A space voyage that began inside a toilet bowl leads an astronaut to stroll around the solar system and beyond, discovering a universe populated everywhere by armed revolutions, wild and domestic animals, bizarre characters: a digital hostess, Galileo and Aristotle, a phantom Houston, a philosophic interpreter who speculates on a new, quasi-scientific theory – the Cosmic Toilet – according to which, if everything is relative, everything is really relative.

Structured like a comic strip in the form of a Baroque opera, MONDI POSSIBILI represents a further evolution of the previous radio dramas (Hörspiele) AMORE MIO – Love Songs und anderer Kram (SWR-2012) and HIN UND ZÜRUCK (SWR 2017), where the meaning of musical and text elements is shifted on parallel levels to create new perspectives and visions.

If in AMORE MIO, songwriting is contaminated by (acoustic-radio-experiments) and in HIN UND ZURÜCK, a Western-movie style tale looses itself in the midst of Eastern European reminiscences, opera music and drum’n’bass, in MONDI POSSIBILI an improbable Baroque ensemble made up of Theremin, harpsichord, viola da gamba and jazz drums accompanies and gives shape to the psychedelic, eccentric, hilarious trip of an astronaut who quotes original speeches from the different Apollo missions by heart. A trip that is a voyage through mathematics, pseudo-scientific theories, cosmological doctrines, but above all, a surreal ad entertaining vision of globalization.

MONDI POSSIBILI is also an invitation to play with forms, to measure ourselves up against the hybrid, to break with the rules, all the while maintaining a classical rigor.