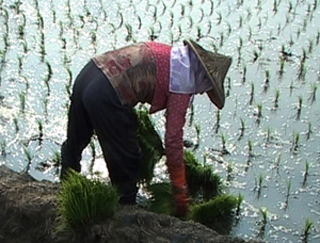 “Yunshan (Yun Mountain) is the cradle of the Zhou tribe, it is the place of origin from where the Zhou people spread out. We believe that the blue spirit Amu has descended to this place to create the Zhou people. and it is here that the Zhou people have taken in his teachings. According to the God Amu, we think that it is possible to live in freedom and to choose our own dimension of life, but Amu told us: you can descend the mountain and spread out in the world to look for a better life,  but you must settle in the place where you will find my footprints and build up a temple in my name there. This is what we know and believe from the beginning on the Yun Mountain.”

The project was born casually from an even more casual trip in Taiwan in August 2006. During the first week of the month spent in the Chiayi County, I did waste a great number of takes because everything is interesting, everything must be filmed, everything is terribly exotic; thus  the heart of the matter gets lost; in other words, for Taiwanese people and Asians in general, we are very exotic, and above all, we resemble each other, like drops of water.
During the second week, the idea of the symphony poured out from a river spring in the mountains, more precisely, at the margins of a little tea-field, where a woman was launching fertilizer in handfuls, with a beautiful wide gesture and a walk which reminds me of the nuclear catastrophe survivers at the beginning of Wim Wender’s Der Stand der Dinge;  of course the scene didn’t fit in at all, also because the natural soundtrack of the place was composed by cicadas, a very peculiar kind of, listenable only in the Alishan mountains; this sound reminded me of La Monte Young’s Theatre Of Eternal Music (but also the Tuva singing).
Thus, the idea of the symphony, which perhaps doesn’t fit in that much either, taking from the classic symphony only the style of the titles, and not the structure (8 movements intervalled by interludes, instead of 4 movements like in the  the eighteenth-nineteenth  century symphony).
A symphony of sounds and images which rises up from the mountains and flows down the paddy fields streams of water, to reach the Chinese sea, gathering landscape memories along its path, people’s movements, songs and most of all, tracking the ineluctability of everything; the eternal typhoon cycle, approaching as Taiwaneses switch on ventilators and disappearing as soon as they switch them off; chickens, geese and pigs cooked, eaten, digested and evacuated; adults and children,  games and  work; city traffic, markets and hawkers, tv-zapping, puppets and flute lessons. 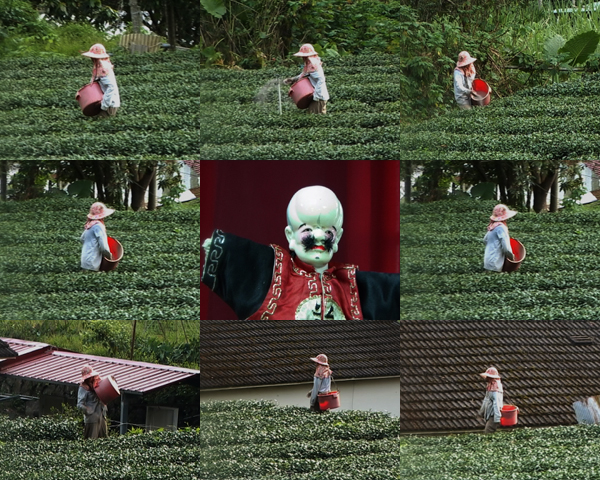 Art as Environment  – A Cultural Action in
Tropics of Cancer 2006

The video is part of the project ART AS ENVIRONMENT – A CULTURAL ACTION IN TROPIC OF CANCER 2006, promoted by a group of Taiwanese cultural operators and artists, led by the visual conceptual artist Wu Mali and supported by the Chiayi County Government; the aim of the project is the revaluation of a country wasted by a rough and chaotic urbanization, pushing artists to work in some little country villages of the County, thus interacting with villagers and educating them to the idea of art and life; fifteen Taiwanese artists and one Italian (just myself) have been working in ten communities creating sculptures, paintings, music and video, but most of all trying to involve country workers, native people, fishermen and villagers in the art-process.

Produced by Stefano Giannotti, in collaboration with the Chiayi County Government in Taiwan, and ART AS ENVIRONMENT – A CULTURAL ACTION IN TROPIC OF CANCER 2006

Interpreters:
the inhabitants of the following communities: 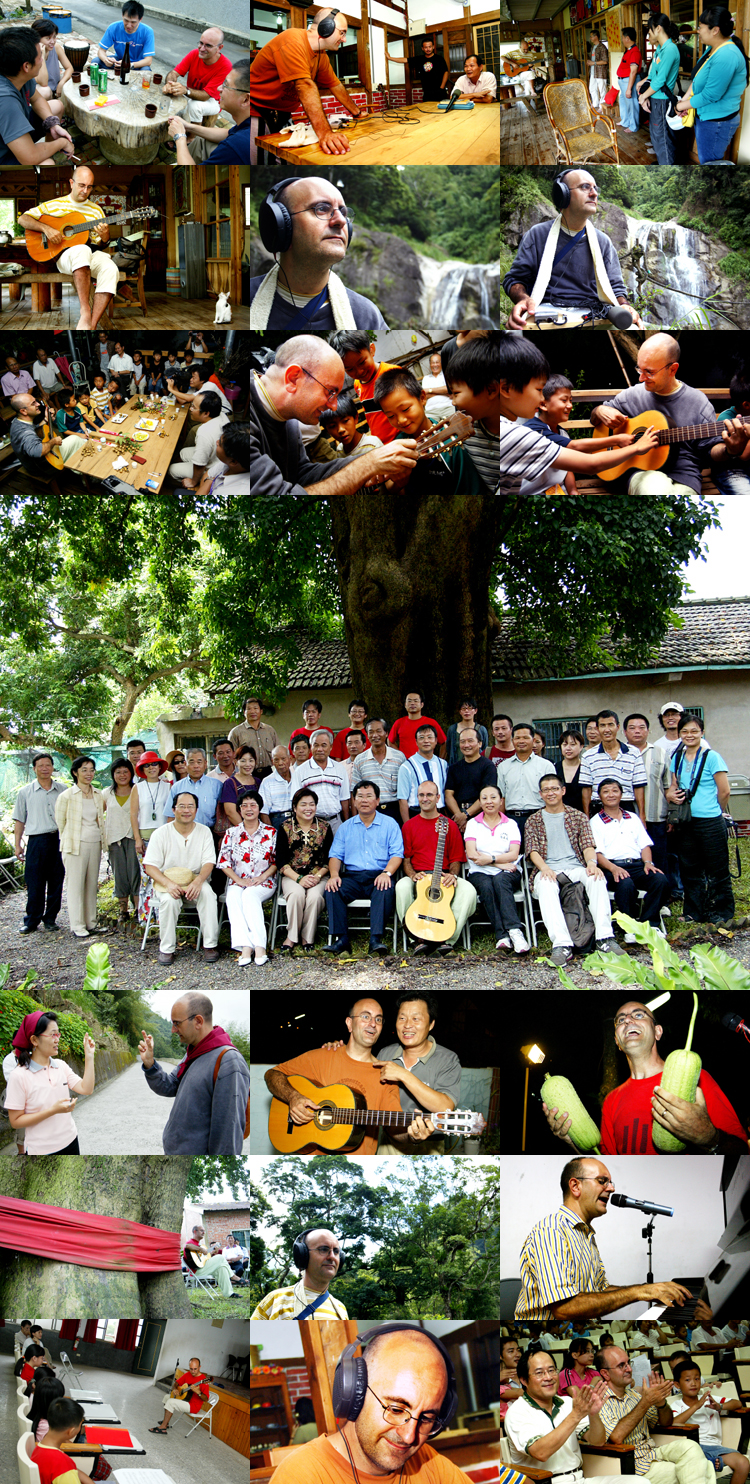 Truly a new voice in the field of experimental film, Stefano Giannotti wrote, directed and produced an exercise in juxtaposition when he created Chiayi Symphony. Giannotti admits to having shot the film almost casually on a trip to Taiwan in August of 2006, but the finished product is a startling commentary on the universality of the human condition.

Though called a symphony, Chiayi Symphony does not follow the traditional pattern of symphonic movements. Through the 18th and 19th century, symphonies generally consisted of four movements of varying tempos each separated by a short pause. But Giannotti’s modification not only eschews most traditional instruments and chord structures, it lacks narrative structure entirely.

The single semi-narrative thread throughout the film is the voice of one man speaking during the opening Adagio. He is a fisherman who introduces the legend of Hamu (a Taiwanese God who encouraged humans to live in the shadow of his mountain in rural Taiwan), and speaks of how humans coexisted with nature in the “footsteps” of the god. However, the man’s voice disappears after the initial movement, but the idea behind his story is continued through another similar voiceover at the end of the film, which continues our meditative exploration of how much the world has changed since the time of Hamu’s birth in the mountains.

The film opens with an Adagio, consisting of ambient natural sounds and some soft harmony and dissonance as the camera slowly pans over rice paddies and mountain vistas. Giannotti creates an almost meditative air with his pacing, and draws the viewer quietly into a different mode of understanding the events and sensations of everyday life in Chiayi County, Taiwan.

It continues into the first of five Interludes, all of which are very short scenes of a man who seems to be performing a show of sorts with traditional Taiwanese dolls or puppets. Unfortunately, there is no translation for what the man says, but as we get into the rhythm of the film, we realize that knowing what anyone may say is largely irrelevant, and that it is the organic nature of the human voice and the presentation of culture and art that is important.

The film’s purpose, as I see it, is primarily to show how everyday life in any city, whether in Taiwan, America, or any other country, is universally similar. By taking small clips, visually and aurally from common occurrences, like garbage trucks or ducks quacking or TV programming, and putting them together in such quick snippets, as Giannotti does in the Scherzo and Agitato movements, we realize just how much we ignore on a daily basis in terms of visual and aural stimuli. The sounds and images of our daily lives are in fact, the symphony he is trying to show us.

Our lives are made up of continuous juxtaposition, and Giannotti uses this to great effect in Chiayi Symphony. His visuals move from rural country to busy city life, show live animals owned by people in contrast to those that have been slaughtered for the market. Pigs and poultry grunt and honk in harmonic and dissonant audio tracks while the images show people enjoying a family meal in the Scherzo movement. The events and scenes we experience on a daily basis and then ignore are brought to the forefront for examination in this careful presentation of humanity.

In the Concertato movement, numerous tracks of different groups performing music overlap and blend with each other in a curious kind of mélange while the images on screen float ostensibly from one performing group to another. Sounds of nature blend into gentle harmonies and dissonance created by Giannotti’s instruments, as well as his recordings from the city noises. At the beginning and the end of this section, Giannotti allows a single voice to break through the cacophony, echoing the voice of the fisherman from the first movement and continuing the bridge of human voices throughout the film.

I think one of the things we forget is that the sounds human beings make are just as organic and musical as anything else in the world. And the continuity of the human voice throughout the film is what ties it together so well. Providing that bridge, even just through untranslated sounds (the interludes, children playing, adults singing), allows one section to follow another and the film to coalesce into one work instead of disjointed images.

Chiayi Symphony begins with nature, and the human observation of nature, a little human interaction, but not much. Gradually humanity and cities and civilization become more prevalent through each movement, until we reach the finale, where we meet another fisherman. We see his interaction with nature, hear his voice, and see what he is describing. We witness the disappearance of the old fisherman and his ways. The influence of humanity is present in the pollution of the water, and the technology in the fish markets. We observe dead fish quietly floating in water filled with trash, a bitter irony for a man who makes his living selling healthy, edible fish to the markets.

As he finishes his narration, the film returns to nature, mirroring its audio track, and the life cycle it has so artfully shown us. Raindrops fall, and native Taiwanese flutes play simple melodies as live koi swim gracefully for the camera; a final juxtaposition of life and death.