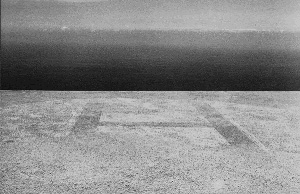 Matilde can’t sleep. Her sleep is disturbed by visions and premonitions on the origin and the destiny of the World. She cries. In her long wake, she “sees” three different moments in man’s course, as interferences on the other side of the craddle. These revelations join other visions concerning mankind’s archetypes and cyclic rites.

Senza parole (“Wordless”) The World dominated by birds and people who have lost their power of speaking; a man and a woman try to pronounce words in vain, but the only one which comes out is “Karaoke”. Exasperated by their circular aphasia (corroded more and more by misterious radio-signals) they try to comunicate with sex, and at the end they imitate birds’ sounds.
Appunti per la scena del matrimonio (“Notes for the scene of the wedding”) A wedding cerimony, celebrated among feedback and “stereo return”, as the fading memory from an old diary. Wine, churchbells, laughs. A pencil jots down the events in real time and transforms them into numeral codes.
La terra ascoltata dalla luna (“The Earth listened from the Moon”) The World dominated by chaos. What a hypothetical listener, located on the Moon’s ground, would hear of the Earth. Overload. Data on data, control parameters. Through subsequent orbits (“Anelli”), a sound view of places and cities in constant transformation. Above all, he would hear the complete absence of silence, quick breathing, the space occupied entirely by programs, radio-waves, white noise.
Appunti per la scena del funerale (“Notes for the scene of the funeral”) Feedback. A woman is gently weeping. The pencil goes on jotting down.
Nessun messaggio (“No Message”) The World dominated by silence. An answering machine repeats: “no message”. Other answering machines and telephones listen to it and start conversing. Messages reproduce, grow up, combine more and more towards a total lost of control. The signals of a past aphasia come back to memory. New wordless voices, and the stage is ready for new stories.
The vision ends into the craddle; Matilde is falling asleep to her grandma’s singing. What does remain is the answering machine which says: “end of the message”.

FINE DEL MESSAGGIO is an opera on the themes of the overload of information and on the dangers of tele-communication.Matilde, a baby of a few weeks, is troubled by dreams and nightmares. In a primitive world (or a sort of day-after magnetic destruction?), aphasic creatures try to communicate in vain, at least to pronounce a word; but their attempts are disturbed by a growing radio tornado which, as the baby’s whimperings is going to repeat periodically in the whole piece. The future of mankind? Aphasia and silence, sometimes broken by violent electronic tides and digital messages. The lullaby consolation is no use, matilde will face life as well as future.
Urban soundscapes, radio-waves, talk-shows, answering machines and telephones, sometimes elaborated electronically, are largely used in the piece. The city of Berlin is resounding on the background, through the Turkish barrows in the Market of Friedenau and the Love Parade in the streets of the centre. Voices of people from different nationalities pronounce the names of places; an English lesson changes into the co-ordinates of a sea-battle; Marino, an elderly Italian country worker tells about his first contact with the radio, on the interferences of Radio Moskau.

The musical instruments (oboe, cello, electric guitar) underline the action, creating their own dramaturgie; they imitate the soundscape elements, play aphasic melodies, add noise.The feedback (obtained by listening to a cassette-player in rec-mode, through an open channel mixer, with digital effects like delays, reverbs, pitches, etc.) re-interpretates electro-acoustically the theme of the information overload.

Composed and produced in Berlin, between May 1998 and February 1999