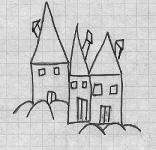 CD
Buy the CD on Bandcamp

A radio-play for children’s voices and music-boxes

LA CITTA’ DEI CARILLONS is an opera on the themes of childhood’s creativity and Europe. Children from 29 different European countries read and recite stories written by them on the three words “WIND, STREET, MUSIC-BOX”; the differences of language, plot, culture, give birth to a sort of theme with variations (the three words with their respective interpretations), and at the same time they draw a new map of the European Community, without boundery lines, politic-religious divisions, ethno-economic conflicts.

The “music-box” is wrongly called in Italy “carillon”; all over Europe “carillon” is a set of bells sounded by hammers in a belfry. This fact created some confusion when I started working at this project. Thus I decided to leave this ambiguity of meanings inside the piece (children speak of music-boxes, but sometimes they imitate churchbells; churchbells are hearable as well, towards the last section of the opera.

In october 1992 I began to tape the voices of children in an elementary school in Lucca. I planned to create a didactic work in which I could combine games and literature. During my successive journeys in Poland, Finnland and Austria, I had the occasion of presenting CANZONI NATURALI at festivals and on radiophonic programs (the piece is a kind of walk in retrospect from old age to childhood, during which the pre-recorded voice of my grandmother, who sings a song of the thirties and the voices of children who tell stories, are divided by the cycle of water from the storm to the sea). In every place where I presented “Canzoni Naturali”, I taped the voices of local children in such a way to have different versions of the work, according to the different countries. As I gradually went ahead, the idea of an autonomous work with all the children of Europe became clearer. At that time I had taped only six languages. I began thus to contact various embassies and schools for foreigners in Florence and Rome. But the most part of children’s voices were collected in Berlin in 1998, during my sojourn as guest of the DAAD. At the end of June I had collected the following languages:

LA CITTA’ DEI CARILLONS is the last part of a work-in-progress on four moments in man’s life (counterclockwise), started in 1989 with RITRATTO DI PAESE (1989/90, a sound documentary on the themes of old age and community), developed through I VIAGGI DI BEPPE (1992/93, middle age and loneliness) and LEZIONI DI MUSICA (1994/96, at twenty, the couple).

The piece is divided into five untitled movements. A strictly classic structure (with solos, choruses, concertatos) counterbalances with the extreme parsimony of the sound materials used; in fact the whole composition is made only with children’s voices, music-boxes and few rarefied landscape sounds.

I. The first movement is a sort of preludium, on the notes of a music-box with perforated card. The short composition is a modal canon on the seven notes of the C scale.

II. The second movement opens with a spoken chorus; every voice reads a different story. The result is a sort of chaotic effect, similar to a noisy flock of birds; the chorus fades out leaving place to the three words (WIND, STREET, MUSIC-BOX) pronounced in different languages and separated by long pauses of silence. The succession of words, combined with the sounds of the precedent card (played slowly, as imitating the words), create a sort of slow breathing asymmetrical rhythm; a first group of children starts to read their stories, one by one, counterpointing with the words and the perforated card music-box (which remain until the end of the movement, while the stories slowly fade out).

III. Wind sounds (few seconds). Two children read a story; a three notes music-box orchestra wheels growing very slowly from the backside. As it reaches the climax, a spoken chorus (like the one of the II movement) comes in; after some time it slowly fades out (with the music-box orchestra); a solo child reads his story. A music box (with melody) starts playing; the child’s voice fades out, while the music box runs down.

IV. Street sounds. In the background two children read a story. Other voices start pronouncing the three words in different languages. A sung chorus imitating churchbells starts to counterpoint with words and stories in a big crescendo; this crescendo culminates with a long musical section orchestrated by several music-boxes playing altogether (as the spoken chorus); one by one, the music-boxes run down, leaving place to two children’s short stories.

V. The last movement opens with a voice singing; a spoken counterpoint between three different stories (in different languages) and the three words, is built on the song line. As the three words end (they have been pronounced in all the 29 languages), we hear the sounds of a carillon of bells; groups of children play altogether, interpretating the three words from a sound point of view. Here starts a final crescendo made with children’s voices shouting; at the top of the crescendo the spoken chorus comes again; the chaos changes slowly into a sort of general aphasia (composed with many fragments from children’s recordings).

One by one, children start laughing; they fade out slowly, while the retrograde melody of the first movement start playing.