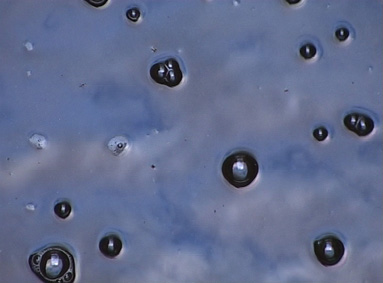 Sinopsis | Video | The Making of Bolle

Could we imagine a mathematical structure in some by chance natural event?
Are our lives regulated by structures or are we moving random without a goal, interacting and extabilishing relationships between other livings?
Is our path signed by a constant change, like in Eraclitus’ river?
What would it happen if our brief personal history (our own personal lives) could be repeated several times, always with a different cloths?

These questions (and many others), which accompany my everyday life are at the origin of BOLLE (Bubbles), my new production for Radio Copernicus.
A 2’45” film showing the movements of some bubbles in a little pond is looped several times; the film itself, representing a sort of theme is totally untreated and reported in its natural beauty (an hypotesis of living process, of mathematical scheme as a DNA structure).The following repetitions are electronically treated according to different techniques and topics, as variations on a theme. Every single section is detailly synchronized with a sound plot as in an animation movie, a sort of mickey mousing made of natural, electronic and instrumental sounds.
The basic idea is to transform a by-chance landscape event into a real score, a visible scheme regulating the delicate borderline between alea and structure.
If on one side the piece presents itself as a video-composition (where the video has not only the charachter of an exploration into the power of images, but also the function of making visible a compositional process), on the other side the piece can be observed also as a radio-composition, (the video-soundtrack, without the help of the score); in this sense radio becomes the loudspeaker of a sound event resulting from the sheme generated by a natural event. A simple, natural process becomes an explosive mean to generate sound-plots; with a pinch of fantasy we can create thousand and thousand imaginary soundscapes, all generated by the same minimalistic structure.
Last but not least the piece is also a live performance, where a musician or a group of musicians can synchronize themselves with the beauty of the natural movements.

BOLLE, as many others productions of mine, shows the possibility of taking the composing process as a sort of game; with a few basic elements we can build a cathedral, in the same way as a child with a bucket of sand can build a castle on the beach. Differently from the most of my previous pieces, I like to consider BOLLE as a sort of open composition, an unfinished piece which can be continued also by somebody else; in some way, it’s close to La Monte Young’s utopia of a composition which has the power to auto-generate and reproduce itself for centuries and millemniums.
BOLLE is also a tribute to one of my favourite film directors (Andrej Tarkovski) whose work has had the power of transforming nature into pure poetry. 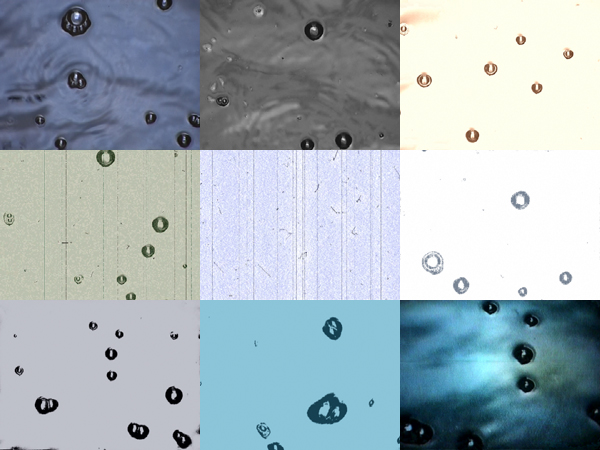 The Making of Bolle